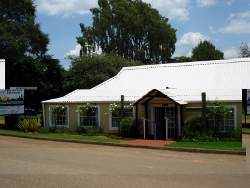 Our history at Haenertsburg Christian Church was established by the grace of God in 1998 through the ministry of Pastor Ian Loughor-Clarke.

Ps. Ian Loughor-Clarke was an assistant pastor at Letaba Christian Church (now Shekinah House) in Tzaneen when he was requested to start a cell group in Haenertsburg.  This cell grew and multiplied, and evening services were then started in the local Agricultural Hall in August 1997 with Ian Loughor-Clarke serving as the pastor.

On the 1st February 1998 Haenertsburg Christian Church was launched as an autonomous Church.  Representatives from several other Churches attended and the launch was a great success.

One of the best things about us, or our congregation, is that it has a pure history with no stigmas attached and has only had one Senior Pastor from the launch till now.  To plant a congregation in a small community is one of the most difficult things to do.  This was one of the most trying times in Ps. Ian’s life, as well as in his wife Annchen’s life, as there were many months when they could not get paid, but finally after about 3 years after the launch, the congregation had a financial breakthrough.

God has blessed this Church with faithful congregational members and all stand amazed at the Hand of God on this ministry.  It is exciting to see the congregation slowly but surely reaching Haenertsburg and the surrounding areas with the gospel of the Lord Jesus Christ.

The leadership is highly committed to the vision and purpose of God for this congregation and are all fully aware that unless God builds the house we labour in vain and we know that God will continue to build this, His Church, which means that this congregation can only succeed.

On 10th March 1999 we launched our Sotho Service (as many people in the community cannot speak English) with Ps. Ian Loughor-Clarke preaching and Aubrey Maponya translating.  About a year later the reins of leadership for this Sotho branch of the church, were handed over to our newly appointed pastor Aubrey Maponya.  This ministry has had its ups and downs and has now changed its name to Logos Believers and is no longer under our covering.

Haenertsburg is a very small community (village), yet the church continues to grow and mature even though many of the previous congregants have left the community or gone overseas to impact that part of the world.

In the beginning of 2005 Ps. Ian spoke to his eldership about buying the property that the church was renting for its services, as the owner wanted to sell the land by the end of the year.  He shared his vision of sub-dividing the property into three and then selling the other two pieces which would cause the church to get the property for “free” and even make a profit.  Every single elder shot him down by saying that the price was too high and that the property was not worth the cost.  Ps. Ian said that everyone was to pray over the issue for the next 5 months to see what God was saying.  After this time the elders unanimously agreed that we should try to purchase the property.  Supernaturally the church was given the bond and so eventually the property became the church’s.  The two stands were consolidated and then sub-divided into 3, and 2 of the stands were sold, which helped the congregation not just to pay for the church building but even to make a profit.  What an amazing God!  The pastor had said that one day God would give us the church property.  At last it became a reality. 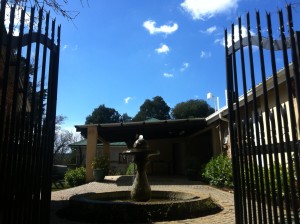 In 2013 it was decided that the church should be enlarged to accomodate more people, as our congregation has not stoppped growing.  In 2014 the church is larger with extra room for our little ones to enjoy children’s church, while the parents are enjoying the sermons.

Recently we had an excellent landscape architect give the congregation a design for our back garden and we are now close to completing this project. This was just another example of God’s blessing and Hand on the congregation, as it is already looking magnificent.

WHAT AN EXCITING JOURNEY WE, AS A CONGREGATION, ARE ON WITH GOD!

Living for God and establishing His Kingdom in hearts, homes and the world

We exist to glorify God by reaching Haenertsburg, the surrounding areas and the world with the Gospel, by discipling and equipping people to spiritual maturity and working towards establishing unity in the Body of Christ.

To reflect God’s glory with all, and grow a vibrant, healthy church

To share God’s glory in Haenertsburg and the world by making disciples, thus multiplying labourers who disciple others in everyday life offering all of mankind an opportunity to receive the saving grace of Jesus Christ and practically helping our community, resulting in growing healthy, vibrant congregations.

Here at Haenertsburg Christian Church we believe in the priesthood of all believers and that we are all called to build the kingdom of God and to make every effort to keep the unity of the Spirit of God.

Once we have given our lives to the Lordship of Jesus Christ, this means that we are then “born again” and we need to work out our salvation with fear and trembling as we read in the Bible.  God wants us to grow up as Christians and not to remain infants in our understanding and beliefs and this means that we need to put in some effort and time for this to come about.  Sadly most of the universal church does not, and that is why there is so much division and lack of maturity.

, but rather to help and encourage you to grow so that the Holy Spirit may become more and more real to you on a daily basis. So please allow us to help you live out your full calling and potential in your Christian walk, by making use of our free sermons and service.