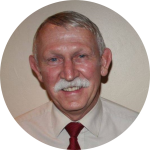 My wife, Gwenda and I are married for close to 35 years now, and this may not seem like an achievement  of note.  Fact of the matter is that in that time, we never had a fight.  We know it is because of many occasions we were humbled and when you stop to recover and take stock, you come to understand that you receive exactly  what you have been praying God for.

Before any relationship between us started, we did not even talk to each other (for eight months)  -  because of hardheadedness from both side sides.  I asked the Lord one evening,  if Gwenda was the wife I should marry, someone must come and tell me precisely that!  While I was teaching the next morning, the "Dominee" walked into my class and told me: "You may marry that lady (Gwenda)!"  She wasn't aware of anything and our  relationship started in October of 1980.  December I asked her to marry me and we were married on 11 July 1981!  People were somewhat surprised and did not give this marriage any chance of survival  -  even started to count the months!

I do believe that this was the sound foundation on which we built and when we started our married life, we invited Jesus to guide our little boat  -  as we were not in any way going to let the enemy destroy what God has granted us in His grace.  We have been blessed in our marriage, because He is our Protector and Guide.

It is strange that I read this today, when on Saturday night Paris was swept by a mindless carnage.

Over 130 people were killed in mindless terrorist attacks right across Paris, let alone those who were injured and others that will live with the horror of this for the rest of their lives. It amazed me as Paris was certainly the last place I would have thought the terrorists would attack.

How do they justify this bloodlust? Interesting in Chapter 8 of Daniel, in his vision, this mindless, pointless fighting all happens outside the gates of the city. As I thought about this, I realised that these fanatics are all committing their crimes (and no matter what you call it, it remains a crime) outside the gates.  Will this get them through the gates and into the presence of God?  Is this what God is looking for? People who will take the law into their own hands and kill without thought for the sorrow, heartache and fear they leave behind.  Does God want us to rise up like this, in His name, in a rabid killing spree with no thought for the repercussions?

Then it came to me – NO – this is not what He wants. He sent His son to be the last sacrifice, so that we can come into His presence in peace and joy, with love in our hearts, because we have been washed cleaned and purified by the blood of His son.

PRAISE BE TO GOD!

When I read verses that I read and marked a number of years ago, I realise that once again God had protected me, provided for me and led me back to where I should be, yet I cannot remember what that terrible problem was!  I know it must have been insurmountable in my eyes – but to God it was a mere trifling.

How many times have we been desperate – with no idea how to solve the problems, yet a few years later we can’t remember what the problem was – we got through it – not in our strength but with a little help from our friend – GOD?!

What to us seems like the end of the world – is nothing to God.  SOLVED – DONE AND DUSTED!

What a mighty God we serve – or do we? Do we only run to Him in times of trouble or is He our daily Companion?

When I think about these killing sprees in France – done in the name of the perpetrators’ faith, I wonder how they justify what they are doing.  God did not wipe out unbelievers in one fell swoop – He sent his son to form a bridge between us and Him.

What do we achieve when we blindly kill hundreds of people – and often ourselves?  Instead of drawing people to God, we are alienating them.  What do you gain if someone claims to serve your God out of fear for what you will do?  How often don’t we do this daily – not hundreds but one by one.  We may not physically kill them, but we kill their spirit by our words.  Are we not as much to blame for the lost which we have driven away because of what we do or what we say?  One lost sheep is as precious to God as the whole flock.

The God I serve wants to win people through love.  Should anyone be killed because of his/her love for God, He is there for them.  Such a person is killed because he loves God and is not prepared to deny God.  His choice!

“You’re talking like an empty headed fool. We take the good days from God, why not also the bad days?”

If everything is always good – all fluffy and floaty, would we keep our eyes on God? Trust him implicitly or begin to think we are invincible and start to forget Him? I have seen it in my own life. When things are going well and I am floating on a cloud of contentment, I slowly (sometimes not so slowly) begin to drift away from God. I still love Him, but I am too busy enjoying myself to spend time with Him. I never think to stop and thank God for all the blessings He rains down on me. Let’s face reality – the good times we experience are from God! The only way God can then get our attention and get us to remove the rose tinted glasses so that we can see reality, is to send a few trials across our paths. You don’t grow in the good times – it’s the trials and tribulations that bring us back onto our knees and back to our loving Father.

After all, if you want good fruit, you need to prune the tree drastically!

Three words we often say – but do we really forgive?

In Psalm 25:7 – David asks God to “Forget that he had sowed wild oats; mark me with your sign of love” he pleads and in verse 11 he says “Forgive my bad life, it’s been a very bad life.” I am sure we all feel like that – if not all the time definitely some of the time.

The difference between God’s forgiveness and ours is that He genuinely forgives and forgets – but do we? We drag the wrongs with us throughout life and then pull them out and polish them up just in case we forget. Have you noticed the one person you can never forgive is yourself?   You keep remembering the things you have done wrong and you keep feeling lower than a worm because of this. Should you speak to God about it He would look at you puzzled and remark that He certainly does not remember an incident like that.

It’s easier to say “I forgive you” than to actually do it – especially when it is yourself you have to forgive.

Don’t feel alone – you are in the company of all the world! “All have sinned and fallen short of the Glory of God” – all we need to do now is to practice “forgive and forget” on ourselves.

(Quotes from the Message Bible.)